Tired of always focusing on negative elements to improve? What if you could focus on what goes well every now and then? Why not identify why things go well and what will keep on going well in the next few months?

How to run the Appreciative Retrospective?

Set the mood with Kudos (5 minutes)

First, start with a Kudos session. Each squad member writes a positive message to someone else.
It should bring a very nice atmosphere to the meeting. 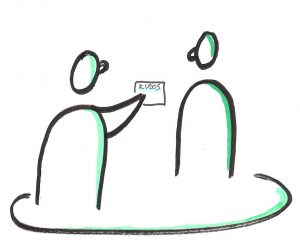 When the mood is set comes the first Post-it session. The goal is to write down all the good things related to the team: past successes, strengths, nice events, …

The focus can be set over a short timeframe, such as a sprint, or you can also run it on a longer period such as a full quarter or even a year.

You can take some time to explain and comment some of the Post-it’s. It basically frames the positive foundations of the team.

The second Post-it session will focus on the future of the team.

Ask yourselves: “What would I want to write down on my Post-it’s if I do this exercise again in one sprint/quarter/year?” What would be the strengths of the team? What new achievements would the team have reached?

You can then identify similar themes and start grouping all these Post-it’s. Do not forget to mix the “now” and the “future”. 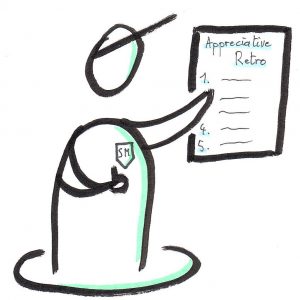 Once the Post-it’s have been sorted, initiate a dot-vote to determine on what aspects the team will work during the next period.

Depending on the number of topics, you can allot between two to three votes to each team member and let them spread them as they like. It is often a good idea to limit the maximum number of votes on a single topic.

Decide on the next steps (15 minutes)

The final part of the retrospective aims at reviewing the votes and decide what actions should be planned to reach the strengths and successes envisioned by the team.

A few tips to make it more efficient:

This kind of retrospective is a good one to pull out of your toolbox when the morale is a bit low or when the team experienced a few misfortunes along the way. It is a good way to integrate benevolence in your team as it is easy to forget to celebrate the nice aspects of our work.

If every team member agrees to fully commit to the objectives of the retrospective, it can bring a very nice energy afterwards and tighten the bonds within the team.

It also gives team members some concrete examples of what is going well within the squad whenever the management performed assessments, which is a welcome side benefit.

This retrospective technique created an enjoyable moment in every team in which I used it and I try to make it a recurring element in my various retrospective plans.